Here’s that book review promised in my first post! 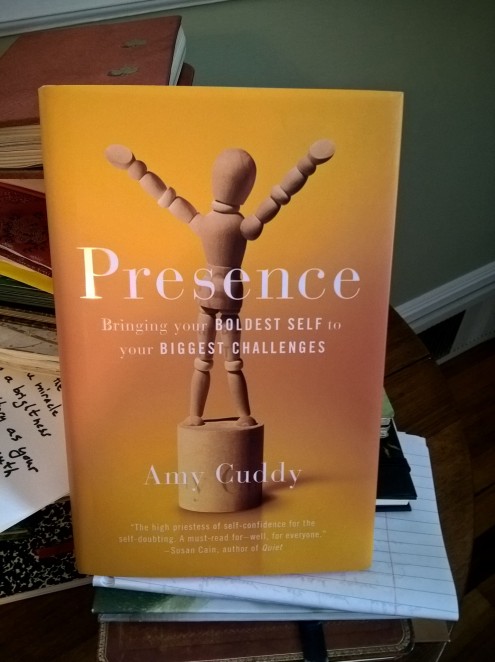 Cuddy splashed onto the popular culture scene in 2012, when she was featured as a TEDTalk lecturer.  A Harvard Business School professor and psychologist, Cuddy advocates changing the way we use our bodies, which in turn changes the way we are thinking and feeling.  With Harvard colleagues, Cuddy designed a series of experiments to answer this question:  If our emotions are as much a result as they are a cause of our physical expressions, then what would happen if we adopt expansive postures even when we are feeling powerless?

Results from their first experiment suggested that, indeed the body shapes the mind.  A subsequent experiment measured hormonal changes.  Use of Cuddy’s POWER POSE increased testosterone (the assertiveness hormone), and decreased cortisol (the stress hormone).  If you would like to try the Power Pose, do the following:

feet apart, hands on hips (or up and out!), head balanced on spine, eye gaze out.

Cuddy claims that just 2 minutes in this pose can effect change in the body/mind.  What a great idea for a vocalist who is standing in a hallway waiting to sing an audition!

Frederick Matthias Alexander pre-figured Cuddy’s research in his 1941 book, The Universal Constant of Living:  ‘not many…..are aware how intimately the individual’s use of self modifies the functioning and reaction of his whole being.’  And this is the meeting ground for the Alexander Technique and Cuddy’s work; the mind-body connection.  Cuddy calls it ‘the synergy of body with mind,’ and Alexander, ‘optimal use of the Self.’